The Campfire Audio Solaris is the company’s latest flagship earphone released late last year. According to the company, the Solaris brings a new frontier of sound and offers excellence in sonic reproduction. Well, after spending several weeks listening to the Solaris, they are not wrong about it. This is, so far, the best sounding Campfire Audio earphone surpassing the Atlas and Andromeda. I bet it sounds even better than other earphones or IEMs in the same price range or even higher. Even right out of the box, when I first listened to it, my eyes opened wide and the sound that it produced sent shivers down my spine! Well, enough of the hype and let’s take a closer look at the Solaris and find out why I consider this as one of the best if not the best sounding earphone so far. Please continue reading my Campfire Audio Solaris review below and find out more. 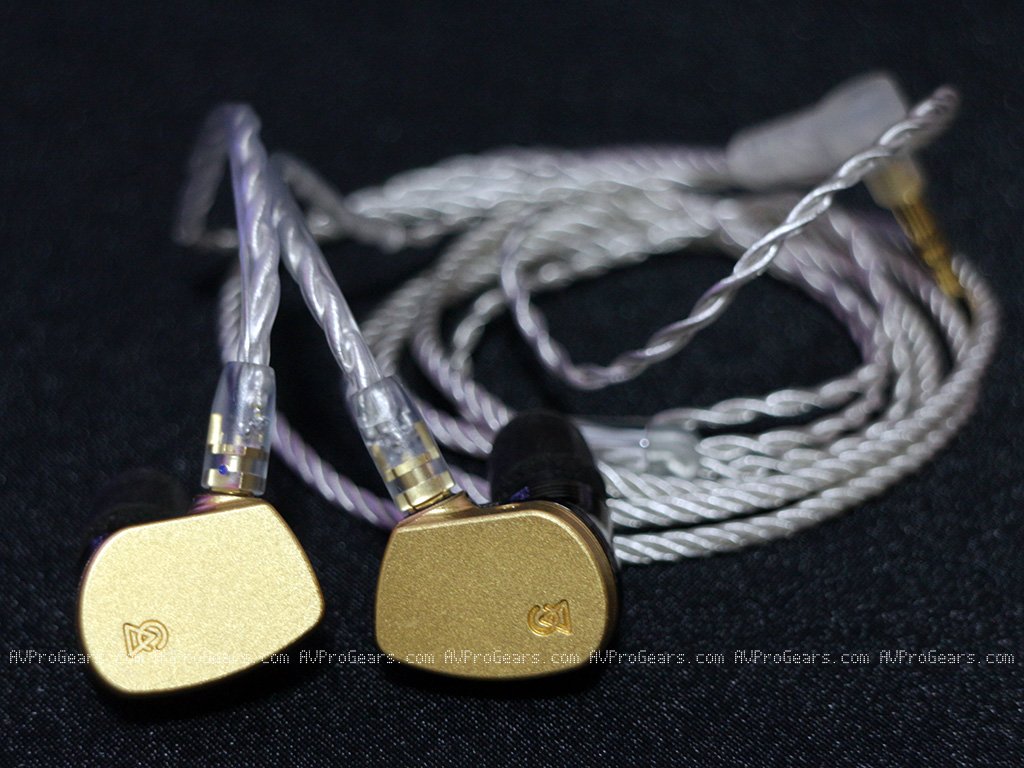 First thing to discuss is the features and the technology behind the Campfire Solaris earphone. It’s the company’s flagship and Ken Ball’s (CEO) current masterpiece. With the Solaris, Campfire Audio brings “new dimensions of sound, technology, and construction”. The Solaris has a very unique design, it’s quite large and exquisite as well. This is basically a hybrid earphone, masterfully combining balanced armature drivers and a dynamic driver into one.

The Campfire Solaris has two custom balanced armature drivers with Tuned Acoustic Expansion Chamber (TAEC) for the high frequency; one custom ported balanced armature driver for the mid frequency and a specially tuned 10mm dynamic driver for the lower mids and low frequencies. The result, an earphone that I can confidently say the best out there and is worthy of being a flagship earphone. I will discuss more of its sound characteristics in a few moments. First let’s take a close look at the Solaris itself. 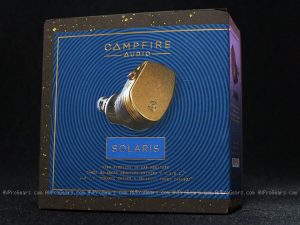 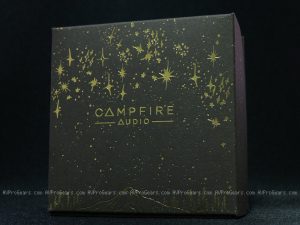 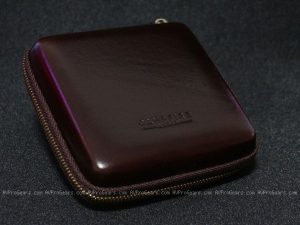 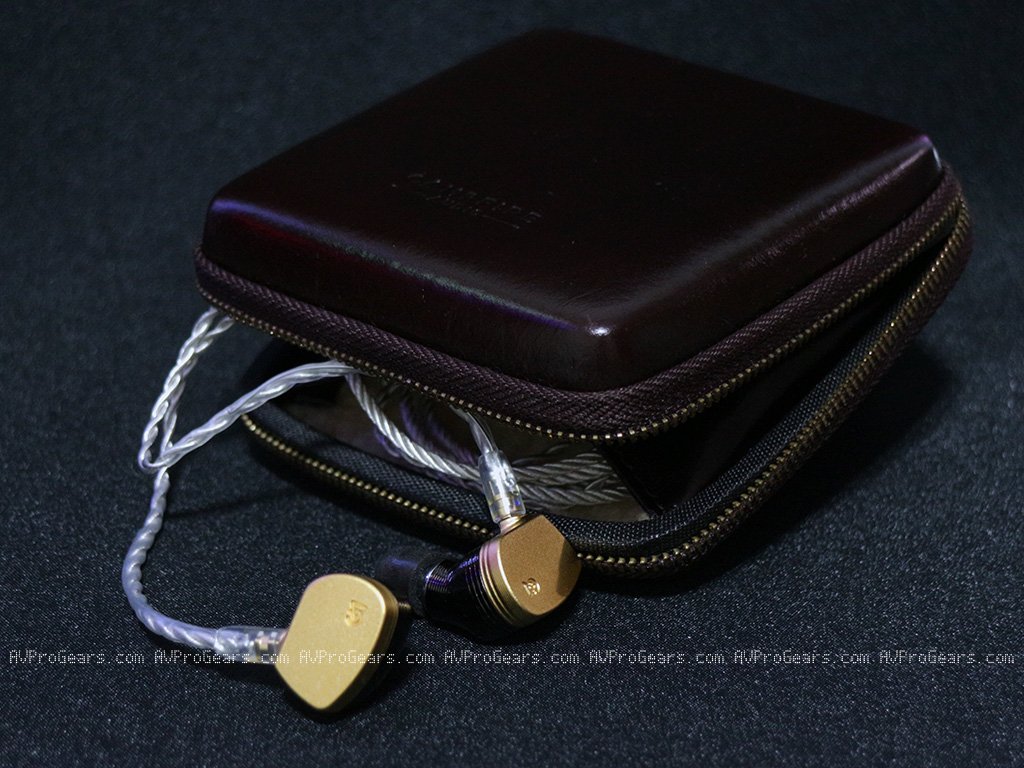 The packaging for the Campfire Solaris is quite different from the rest of CA’s lineup. The box is now larger and square or more like cuboid. It’s still made by the same paper company, as far as I know, but it’s somewhat thicker and the box art looks really nice. It’s doesn’t have a “screaming” box art, but enough to catch your attention. The combination of the colors used and the gold starry sky reflects the name and the theme of the company.

Opening the box reveals the big, also square-ish, premium leather case. Once again, I am very impressed with the presentation and packaging of the product. It does really give you that feeling or impression that this product is premium and well thought off. There are a lot of (audio) products well above the $1,000 price range and the packaging and/or presentation are simply underwhelming. There’s no “wow” factor, unlike with CA’s products.

Aside from the leather case, you also get a really nice Super Litz cable together with the Solaris. The Super Litz cable is basically composed of Silver Plated Conductors featuring multi diameter stranding with Berylium Copper MMCX terminated to a 3.5mm stereo plug. Again, just wow! CA wants you to experience the best out of the Solaris, so they included a really good cable. No need to buy an upgrade cable, as this cable is better compared to the cable you get with the Atlas and Andromeda. I’ll discuss this on a separate article, where I compare the three earphones – Solaris vs Atlas and Andromeda.

You also get a bunch of accessories like Final Audio E-Type tips, marshmallow earphone tips, silicon earphone tips, Campfire Audio lapel pin, a cleaning tool, and an earphone protection sleeve. The tips included do come in several sizes – small, medium, large; while the Final Audio tips comes with extra-small and extra-large sizes aside from the typical S/M/L sizes. 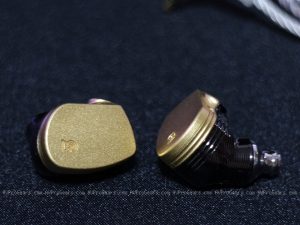 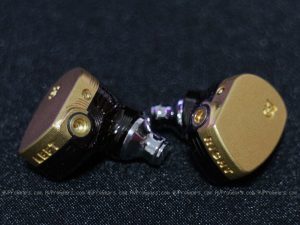 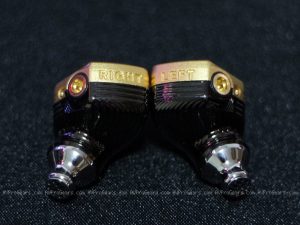 Like I mentioned earlier, the Campfire Solaris is a hybrid earphone; meaning it uses balanced armature drivers and a dynamic driver in one shell/channel. This technique or configuration isn’t new, as Campfire Audio has several hybrid earphones before the Solaris and it has been used by other earphone/IEM companies as well. But configuring and combining both type of drivers into one and making them “sing” harmoniously and coherently is another story and it’s actually not that easy. It requires skills, knowledge and years of experience.

The Solaris has a total of 4 drivers inside per shell/channel. There are two balanced armature drivers for the high frequencies. These two BAs are combined with the company’s Tuned Acoustic Expansion Chamber technology that allows them to extend the high frequencies without producing sibilance or fatigue. This is actually one of CA’s “wizardry” and according to them it is superior to the typical tube with dampener system because, I quote, “it provides a direct passage from the driver to your ear, which results in unsurpassed clarity and extension”.

For the mid frequency, CA is using a larger single custom rear-ported balanced armature driver paired with a specially tuned 10mm dynamic driver for the mid frequency down to the low frequency. The 10mm dynamic driver features an Amorphous Diamond-Like Carbon (A.D.L.C.) diaphragm that is more likely similar to the one used in the Atlas, but configured differently. The mid-section is optimized by what CA calls “Polarity Tuned Chamber”, optimizing the sonic performance of the dynamic driver and its performance. 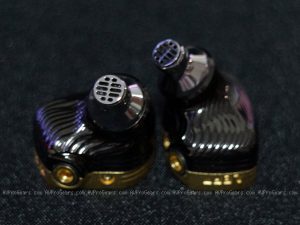 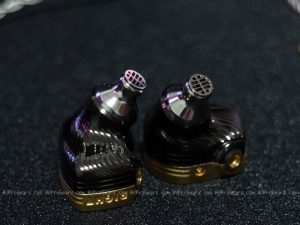 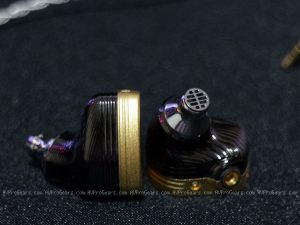 One very noticeable feature of the Solaris is the gold face plate. It’s a 24K gold plated lid paired with a durable PVD finished body. It looks very attractive, the gold color matches my jewelry, which is a plus for me at least. You can also see the stainless steel spout, however I have to emphasize that the size of the shell of the Solaris and the nozzle is a bit larger compared to the other earphones from CA. The Solaris is actually quite large and it may not fit well with small ears or ears with smaller concha.

The first time I wore it was a bit odd for me, because the inner part of the shell didn’t sit properly on my ear / concha. Unlike with the Andromeda where it can sit on my ears without any odd feeling. It also protrudes a bit due to the size of the shell of the Solaris. I had to try all the tips to find which one would give me the best or at least the most comfortable fit, and had to rely on the ear hooks to make the Solaris sit on my ears properly.

Overall, I love the packaging and the presentation of the Solaris. I am very impressed! I also like the choice of color and the design. But it is quiet big and the fit may or may not be an issue; it’s definitely going to vary from one ear to another. 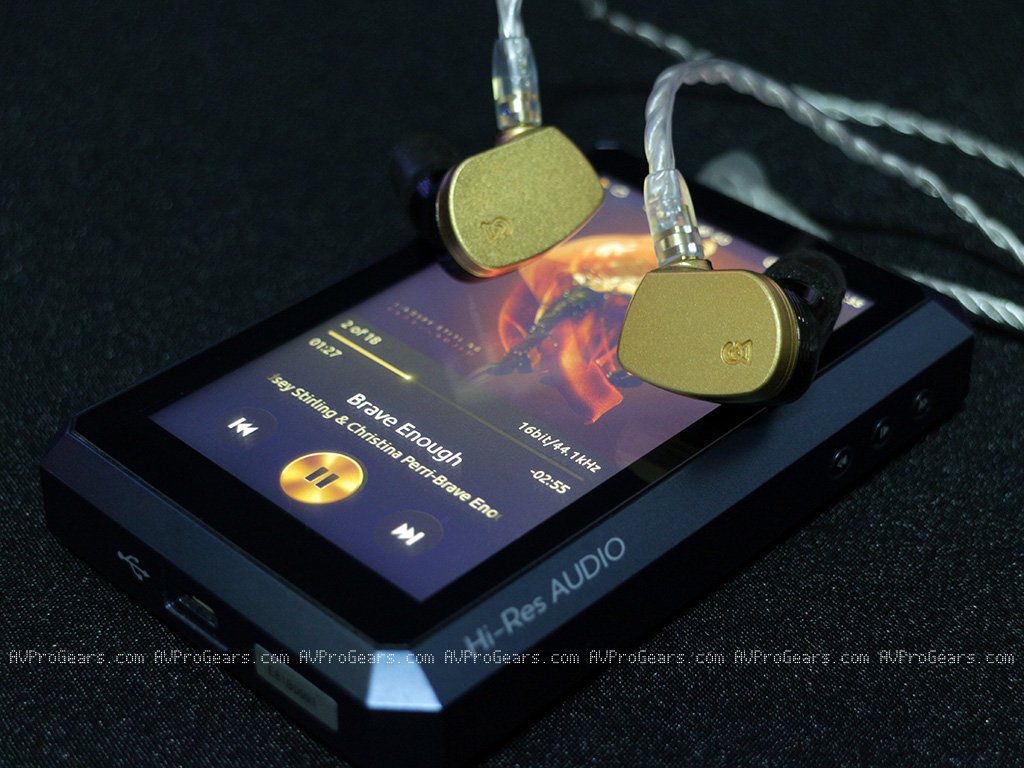 When I got the Solaris, I have no idea as to how it sounds like. It didn’t read the initial reviews or the details of its sound characteristics. All I knew was it sounds great, it’s currently the company’s flagship and everyone was praising it. I didn’t knew what the hype was all about, until the first time I listened to the Solaris. 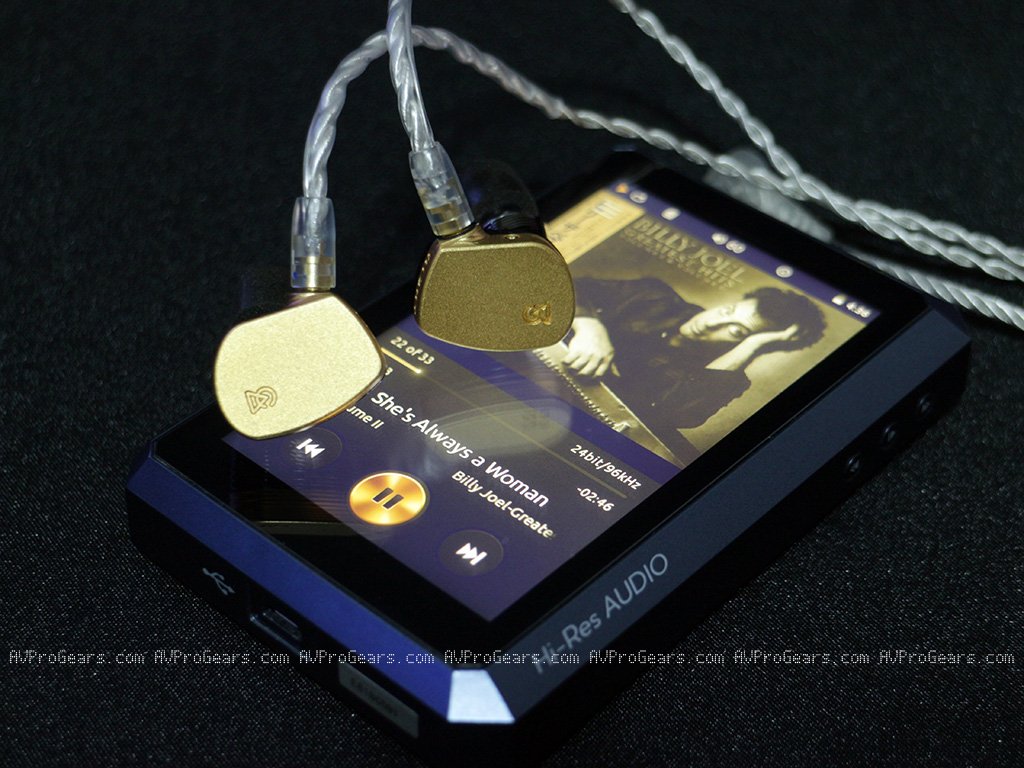 The Solaris has a good amount of bass presence. The bass goes deep without being overpowering and provides enough rumble and texture. This is thanks to the 10mm dynamic driver inside the Solaris. However, the bass is not as pronounced compared to the Atlas. It’s just the right amount for me, enough to make the music warm and lush. Bass heads may prefer the bass performance on the Atlas, but for multi-genre listeners it is going to be the Solaris.

The mid range is not laid back, and perhaps it is somewhat forward sounding to my ears. It is similar to the Andromeda but richer and has more texture. This is thanks to the combination of the balanced armature driver and the dynamic driver. The transition from DD to BA is very fluid and coherent. Overall, vocal clarity is also really good; be it from a male’s voice or a female’s voice or even chorus.

As for the high frequencies, it’s never fatiguing or feeling hot. It’s well extended without being sibilant, and there is air and sparkle in the treble region. However, I can hear that the Andromeda has more headroom on the treble frequency and has the edge over the Solaris. Compared to the Andromeda, the Solaris’ high frequency is a bit, just a bit, toned down. Some people may like it, some don’t. I personally like how the higher frequencies are presented in the Andromeda, but it’s not that far on the Solaris.

Overall, to my ears, everything is balanced across the frequencies with the Solaris. It sounds round and lush, and it also has an excellent level of sound staging and imaging. It does have a good amount of 3D or holographic effect just like the Andromeda, but not too wide either. Just enough to give a feeling of solemnity but not cluttered or compressed.

It does, however, sound smooth to my ears. Like if you are looking on a photo or picture, the edges of the subject is not (too) sharp. Nothing is aggressive or more pronounced than the other frequencies. It’s just pleasant overall without any spikes. The Solaris is just “perfectly balanced, as all things should be”…

I am truly impressed with Campfire Audio’s new flagship product the Solaris. It’s la crème de la crème of Campfire Audio. In my Andromeda review, I said that the Andromeda is one of the best, and it still is. But the Solaris is on a whole new level. Now that I have tested and listened to the three flagship earphones: Andromeda, Atlas and Solaris, I can say that the Solaris it the most refined or perfected product among the three. It truly is a flagship and deserved to be on top of the lineup. I can’t really imagine at this time how will the next flagship would sound. Because right now, the Solaris feels like an end game earphone. It’s an excellent all around earphone and can take any genre you throw at it. Of course, if you want something more edgy with the nitty-gritty (micro) details at the expense of bass presence, you might want to consider the Andromeda. Or if you are a bass head, then definitely consider the Atlas. But if it’s an all-around earphone that you are looking for, then Solaris it is.

It looks great, the packaging is great as well and the “stock” cable included is already an “upgrade” cable. There are some more expensive IEMs or earphones that includes with a basic cable only. The only issue that I can find with the Solaris is the size of the shell or specifically the fit. Due to its size, some will definitely find it too big for their ears. You’ll have to experiment on the tips and use the ear hooks as additional support. Also, the Solaris is not a cheap earphone, as it currently comes with an MSRP of $1,499 USD. If you’re new to high end audio, perhaps this might be a bit of a shock for you. However, you’d be surprised to find out that there are IEMs and earphones that are much more, way more expensive than the Solaris. They may or may not sound as good as the Solaris. But if there is one thing I am sure of, the Solaris is definitely worth it!