Following the success of the Fiio M11, which I think is currently one of the hottest and more popular mid-tier portable DAPs, the company will be releasing the Fiio M11 Pro soon. The M11 Pro is basically an upgraded version of the M11, with beefier components and more power. They can basically give it another name, but decided to add just a “Pro” suffix, since the M11 Pro is very similar and shares the DNA of the M11. Check out the rest of its features, specs and price below. 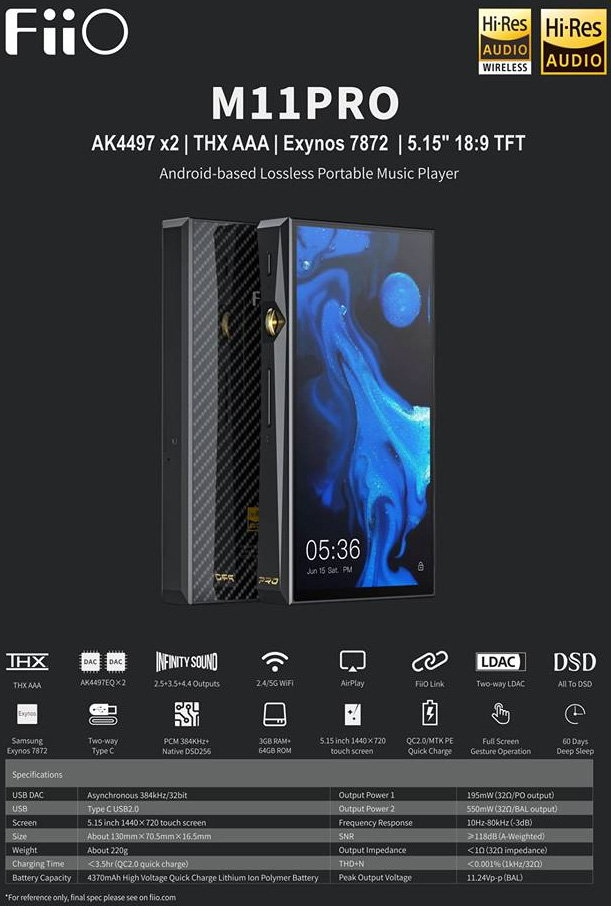 The Fiio M11 Pro will have a major improvement when it comes to its DAC section and power, and several other areas too. For starters, the M11 Pro features a dual DAC setup with two AK4497 DAC chips, and will feature THX AAA amplifier chipset. It will be powered by a Samsung Exynos 7872 SoC, the same CPU used in the M11. The SoC is paired with 3GB of memory, again same with the M11.

The DAC section is not the only thing doubled in the M11 Pro (from the M11). Its internal storage is doubled as well, now with 64GB internal storage (actual usable capacity is of course lower). Another area of improvement is its battery life. The Fiio M11 Pro will be powered by a 4370mAh battery with an estimated battery life of more than 13 hours depending on use.

As far as I know, Fiio hasn’t officially released the M11 Pro yet. According to reports it is scheduled to be released in October, but it could change. As for pricing, it’s not final as well, but Fiio M11 Pro is expected to be priced around $600 to $699 USD. This makes the Fiio M11 Pro a direct competitor to the HiBy R6 Pro, currently retailing for around $699 as well.