Just how small and affordable can portable audio player go without sacrificing much of the audio quality? What I have here is the FiiO M3 a portable mini audio player; it’s the smallest and cheapest audio player from the company. It’s a little bit larger than the iPod shuffle, but definitely smaller that most DAPs out there. Before the M3, the Fiio X1 was their cheapest at $99 USD, and here comes the M3 that is not only smaller than the X1 but half the price as well, at $49.99 USD. So how does the M3 sound? Who is it for? And what can we expect from the Fiio M3? Let’s proceed to my review below and find out. 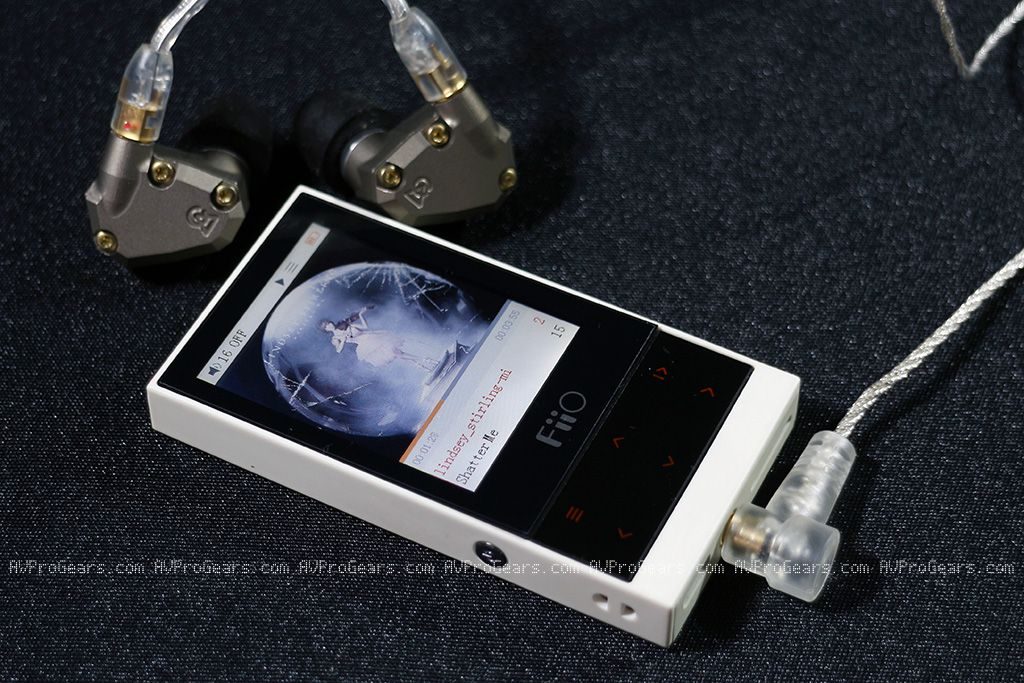 The Fiio M3 features a minimalist design and is basically made to be an ultra-portable audio player. I know my hands are small, but the M3 is just really a small device. When I first saw the M3 physically my first impressions were “it probably has short battery life”, or “sound quality might be so-so” and so on. Honestly I was a little bit skeptical about it. But I gave it a chance and I have been using it for several months already. Before I proceed with my sound impressions and overall experience with the Fiio M3, let’s take a look first starting from its packaging and its user interface. 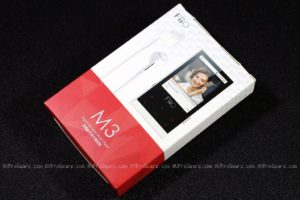 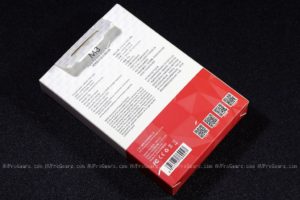 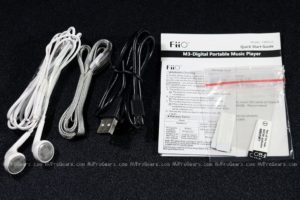 The Fiio M3’s packaging is clean, simple and compact. The box wasn’t hard so you might want to avoid accidentally sitting on it or putting any heavy objects on top. Inside the box you get the M3 together with the following accessories: reading materials, extra screen protectors, a small lanyard sling, a micro USB to USB cable and an earbud with mic and controls. Pretty much complete if you ask me, the only thing you need now is your audio files or a microSD card if the 8GB internal storage is not enough for you.

Honestly, I am not a fan of earbuds. They’re just too uncomfortable for my ears, even with foam. The circular bud pushes or stretches my ear, especially in the Crus helix and Tragus portion, and I can’t wear them for long. However, I did try to listen with the M3 using the included earbud with two or three songs and honestly the included earbud don’t sound bad at all (considering the price of the whole package). The sound quality is decent and clean, and it’s also warm sounding; enough for you to enjoy the music. Now moving to the M3 player itself… 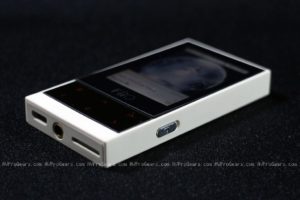 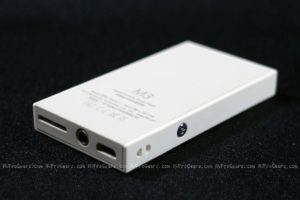 The FiiO M3 is really small and very portable. It measures 74mm× 39.7mm× 9.1mm and it’s just 40 grams. You can choose from four different colors: Ivory white, Blue, Black and Cyan. The M3’s body is made of plastic but it feels solid and there are four dedicated back-lit buttons on the front portion, just below the 2-inch colored display.

The power button is located on the left side and a lock slider is located on the right side. At the bottom of the M3 is the microUSB port for charging and data transfer, a 3.5mm single ended headphone jack and a microSD card slot that can support up to 64GB of microSD card. Beneath the shell of the M3 are the ATJ2129 SoC or its processor and a CS42L51 DAC chip. The M3 is also powered by a 550 mAh that is rated to last up to 24 hours in a single charge.

To give you an idea about the DAC ship; according to Cirrus Logic, the CS42L51 is a “low-power audio codec delivers excellent audio performance while providing portable device developers with an innovative solution that maximizes battery life while minimizing end-product form factors. The CS42L51’s key distinction is that it operates from a single, 1.8 V power supply for low power consumption, yet delivers plenty of output power, 46 mW, into stereo 16 ohm headphones for a great listening experience. This highly integrated 24-bit, 96 kHz stereo codec is based on a multibit Delta-Sigma architecture which allows infinite sample rate adjustment between 4 kHz and 100 kHz.” 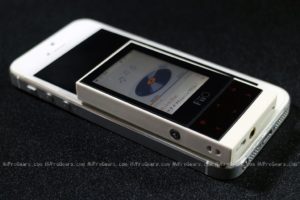 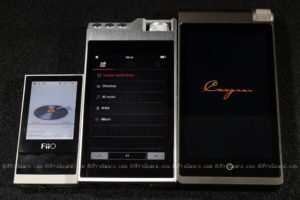 For size comparison, here’s how the Fiio M3 compares with the iPhone 5. I also placed the M3 right beside the L&P L5 Pro and the Cayin i5. As you can see, the M3 is really a small portable audio player.

The Fiio M3 supports not only lossy audio files, but also some of the lossless formats. Yes, it does not support all lossless audio formats (even some higher FLAC formats). For your reference, it supports the following audio formats: APE 48 kHz/16 bit, FLAC 48 kHz/24 bit, WAV 96 kHz/24 bit and lossless formats like MP3, WMA, OGG, M4A (excluding raw .AAC, HE-AAC coding and .m4a encrypted ALAC). If you have a FLAC file and it didn’t played on the M3 that could probably mean that it’s not supported. This is one thing that you must consider before getting the M3. If you want a DAP that plays all audio formats, including DSD files, better consider the higher end DAPs that Fiio is offering. 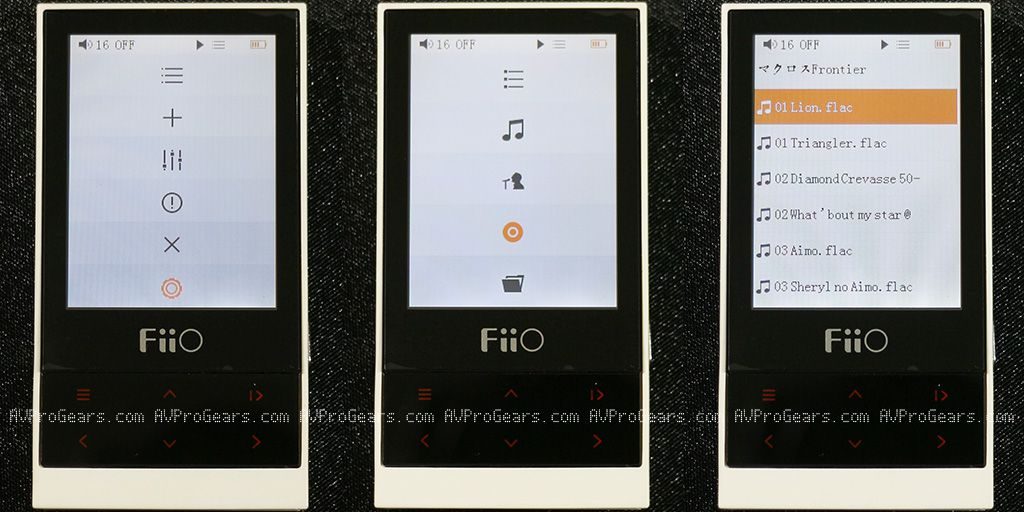 At the time that I was evaluating and testing the Fiio M3, I updated its firmware once and I am using firmware version 1.7. I’m not sure if Fiio will release new firmware versions later on, but I think the FW 1.7 is pretty much stable with no major bugs or issues. The user interface is very simple and easy to follow. You just need to familiarize how to navigate the user interface (especially if you are used to the swiping action on smartphones). In summary of how you navigate with its UI it’s most of the time just up, down and left, right.

If you look at the photo above, the first screenshot (left side) is the options menu. You can access this by holding the options button or the button with the symbol ≡ on the M3. The center screenshot is the folders’ menu, you can access this by pressing the ≡ button once. You can view the songs in your library by genre, by artist, by album or by folder. The last screenshot (right side) is where you select the individual music before you hit that play button.

Take note that you have to keep pressing the button up or down to select a song or track, or you can hold it and it will continue to scroll up or down (depending on what button you pressed and hold). I don’t see a problem if the folder contains only around 20 songs. However, if there are hundreds of songs (or even thousands) on one folder and you need to play a file that is located somewhere in the middle, it may take a while before you reach that file and play it. I would suggest that you organize your files properly, and the most ideal way is to place the music files by album; one folder means one album. And I would suggest that you don’t load the M3 with tons of audio files; the M3 can hold thousands of music specially if your files are MP3. It’s better to load the songs that you are just going to listen for the day or so, than load everything and you’ll have difficulty in browsing through all those files.

The Fiio M3 supports album art as well, as you can see from the photo below, the left side is the default now playing look. There’s no album art associated with that file, and if the M3 cannot load or does not support the art you will get the default look. The image on the right is how the album art will be displayed if it does support and recognize the art. 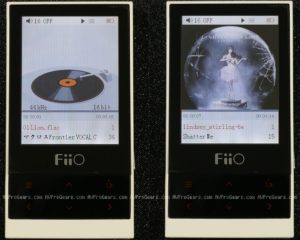 The Fiio M3 has a maximum volume level of 60, and I was quite surprise to hear that it has enough power to drive most IEMs and even some full sized headphones that doesn’t have a very high  impedance rating. My settings are at around volume 20 to 25 for IEMs and around 35 to 40 for full sized (efficient) headphones.

After listening with the M3 and using it almost every day, I can say that the sound it produced is generally clear and precise. I wouldn’t say that it’s a 100% accurate representation of the audio, but almost there and it’s still very much enjoyable. Take note, I didn’t used the earbud that it came with to listen to the M3.  As I explained before, I’m just not a fan of earbuds. Aside from being clear, the M3 also has a warmish tone, definitely not bright and has an overall smooth presentation. It’s musical and good for someone who just wants to listen to music while on the go, and not really to do some critical listening or to do some gear comparison.

The Fiio M3 has a good bass presentation and is extended enough to give you that satisfying rumble. Mids are clear and somewhat warmish, but they are not veiled or too forward as well. In terms of highs, I think the highs are somewhat rolled off on the M3. It doesn’t have those crisp and sparkling highs that audiophiles are looking for. Micro details are missing as well, like I said the M3 is more on for people who just want to listen to some music while they are doing other activities or while on the go.

I think FiiO has really brought something of great value to its customers, “bang for buck” as others might call it. The M3 is a mini portable audio player that is an ideal companion while you are on-the-go or doing some physical activities like walking, jogging or at the gym. Sound quality is not disappointing, in fact it is good. However don’t expect it to have audiophile-grade sound quality. If you are looking for a good DAP for your demanding ears, better check the high end DAPs that Fiio is offering. This isn’t a DAP that you can use as a transport as well or pair with an external DAC/AMP. I think the Fiio M3 is best for those who just want to listen to music while doing other activities and not really do some critical listening.

The Fiio M3 comes with a manufacturer’s suggested retail price of $49.99. You can check the latest pricing and availability at Amazon.com here.