iBasso recently teased us with their upcoming portable audio player called iBasso DX220. Only a small amount of information were shared via their tweet. The iBasso DX220 will feature Bluetooth 5.0, a 5” inch full touch panel and will come with the newest and latest features. Since this is called “DX220”, the naming scheme suggest that it is not that far from their current flagship the DX200. But one thing is for sure, it will be priced a bit expensive than the DX200. It was also mentioned that this new DAP will be coming this April 2019. The company is also planning to release more information and tease us further as the release date draws near. However, based on the teased photo alone, we can guess what some of its features are already.

UPDATE: The iBasso DX220 is now available, you can grab one from Amazon.com here. 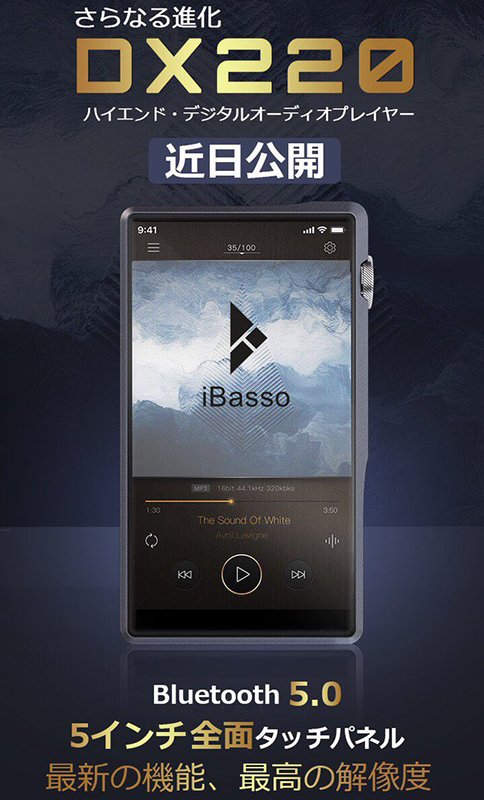 The upcoming iBasso DX220 looks like a refined version of its predecessor, DX200. According to the tweets, iBasso rep said that it’s a refresh model of the DX200; so I am expecting that it will be equipped with better components. It may feature the same dual SABRE ES9028PRO DAC or probably something better. The DX220 will feature an interchangeable amplifier module; and the amp modules for the DX200 and DX150 will also be compatible with the DX220 as well.

Now if you take a closer look at the photo of the DX220, notice that there is a carrier signal right beside the WiFi signal. The company has already disclosed that it will feature Bluetooth 5.0, and definitely WiFi as well. But the image just gave us a hint that may support call and text features as well, just like the Onkyo Granbeat. The iBasso DX220 could perhaps be a digital portable audio player / smartphone in one unit.

Of course, the usual suspects would be present like microSD card slot and several output ports. I just hope that the DX220 will now support the 4.4mm balanced output as well. I’ll try to post more information or update this post once more features and specifications have been shared (or leaked).

The company hasn’t disclosed this information yet. But the iBasso DX200 DAP comes with an SRP of $869; so I am expecting that the DX220 may be priced at $999, hopefully not higher. It was also revealed on iBasso JP’s tweet that they plan to release it by April 2019.