Adventure seekers, here’s a new action camera for you that is that is capable of capturing Ultra HD 4K videos, built with sensors for tracking location, movements and many more – the all new Olympus Stylus Tough TG-Tracker action camera. The Olympus TG-Tracker can shoot 4K UHD video recordings at 30fps, 1080 FHD at 60fps and 720 HD at 240fps. It can also shoot 8 megapixels still photos with a 1/2.3″ sensor, features a 204° f/2 lens, and an electronic 5-axis image stabilization for videos. This small action camera is built like a tank. It features a rugged design, it’s waterproof up to 98.4 feet; shockproof from drops up to 7 feet; crushproof to 200 lbf and freezeproof to 14°F. Aside from the rugged design and photo/video capabilities, the Olympus TG-Tracker is built with sensors like GPS, eCompass, Accelerometer, Barometer and Thermometer. It is also built with WiFi for sharing and transferring photos and videos. The Olympus TG-Tracker comes with a retail price of $349.99 (available at Amazon.com) and it’s available in Green/Black and Red/Black color scheme. Check out more of its features, price and specifications below. 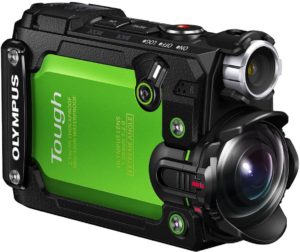 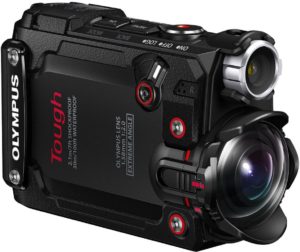 Field Sensor System for capturing all the action of outdoor adventures
The wearable-device market has expanded in recent years, offering ways to automatically record location information, steps walked, calories burned and other life-logging data. In the same spirit, the new Olympus Stylus Tough TG-Tracker is equipped with the Field Sensor System, which includes GPS, a barometric-pressure sensor, a temperature sensor, an e.Compass and an accelerometer. Users can select from three different display options on the LCD monitor, including a compass display, level display, and log display, to show the data captured via these sensors. Log Mode records data without video for extended time periods. 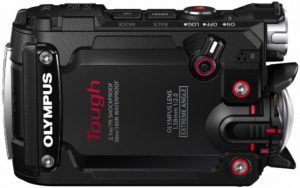 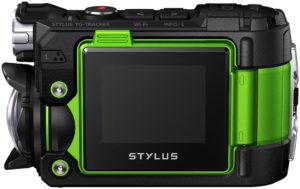 With its sealed construction, the Olympus Stylus Tough TG-Tracker is waterproof to depths of 100 feet (30 meters). The waterproof seal also makes the camera dustproof, so users don’t have to worry when operating the Stylus Tough TG-Tracker in dusty areas. The dual-layer chassis makes for superb shockproof performance, allowing the camera to clear drop tests from heights of up to 7 feet (2.1 meters). Operation is guaranteed in temperatures as low as 14°F (-10°C), so you can shoot in cold-weather environments where other digital devices fear to tread. The Stylus Tough TG-Tracker also boasts a rigid construction that can withstand loads of up to 220 pounds of force (100 kilograms of force). 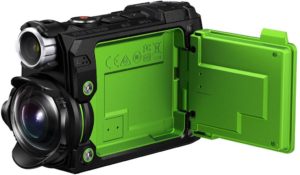 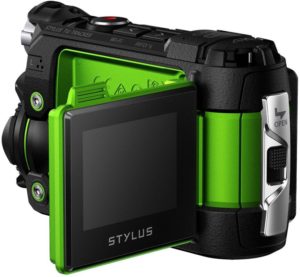 Versatile shooting style and superb controls
The compact body provides for quick and easy video capture no matter your shooting style, allowing low- and high-angle camerawork. An SG-T01 Steady Grip is bundled with the camera to help with stable framing during hand-held shooting.*3 The MC-T01 Mount Coupling comes with a small mirror on the front to assist in capturing wide-angle group selfies.*4 The high-intensity LED Headlight is built into the camera body for shooting support in low-light conditions.*5 Its quick-action operation lets you swiftly illuminate subjects for high-quality imaging. Even when the camera is turned off, users can press and hold the Info button to activate the headlight for standalone use.

Compatibility with the Olympus Image Track smart-device app
The Stylus Tough TG-Tracker is equipped with built-in Wi-Fi.*6 Using the exclusive Olympus Image Track app, users can easily transfer videos recorded on the camera, along with field data, to a smart device. Users can also display the log data and view images simultaneously, enjoying the experience of the shooting environment during playback. Within the app, the data display can be switched between geographical information and altitude/depth information to best match the scene, and data is saved so that users can conveniently check the information at any time. 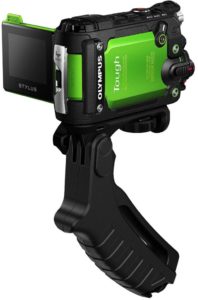 Note: *1 A “chapter” is a bookmark designating a scene transition in a movie. This feature lets you quickly find the exact spot you want during movie playback. Chapters can be manually inserted by pressing the OK button on the top of the camera, but manually inserted chapters cannot be transferred to the Olympus Image Track smartphone app. *2 4K videos cannot be transferred to a smartphone. They should be viewed on a large TV that supports 4K playback. *3 Because the Stylus Tough TG-Tracker’s angle of view is a diagonal 204°, part of the tripod will appear on the monitor when it is connected directly to the camera. This can be prevented by using the tripod baseplate on the bottom of the Steady Grip. *4 The Mount Coupling attaches to the top of the Steady Grip for mounting on the camera. *5 The LED Headlight can be used only for a limited duration. *6 “Wi-Fi” is a registered trademark of the Wi-Fi Alliance. *7 Users can select from 1080p, 720p or VGA and can record at up to 30 FPS in full HD. *8 The bundled UP-T01 Underwater Lens Protector is required to shoot underwater. Without it, the camera will not be able to focus underwater. The angle of view becomes narrower underwater; users must change the camera’s angle-of-view setting to Underwater. *9 When the Electronic 5-Axis IS is activated, the angle of view becomes narrower.

Olympus TG-Tracker Price and Where to Buy

The Olympus Stylus Tough TG-Tracker is now available to order and will start shipping on June 27th. Currently it comes with a retail price of $349. For latest pricing and availability, visit the link below. 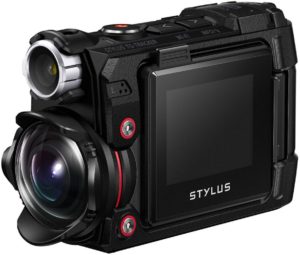 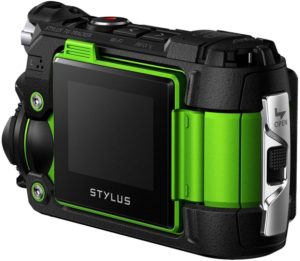 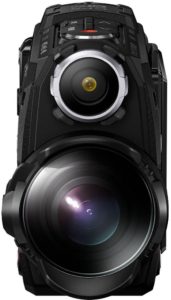 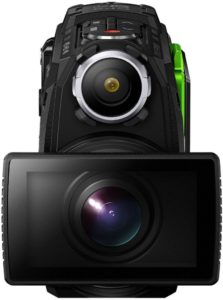 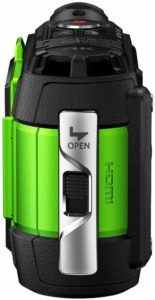