Portable music players or Digital Audio Players (DAP) are popular nowadays. Music lovers and audiophiles are looking of DAPs than can drive their HiFi, Hi-Res headphones and IEMs to enjoy music wherever they go. If you are in the market looking for the best portable music players currently available, then you are in luck because there are several options to choose from. I have updated this list to highlight some of the latest and best portable DAPs in the market according to different categories. There’s no “one DAP fits all”, each has its own unique features, pros and cons; and the best DAP for you might not be the best for someone else. Go ahead and check them out below. 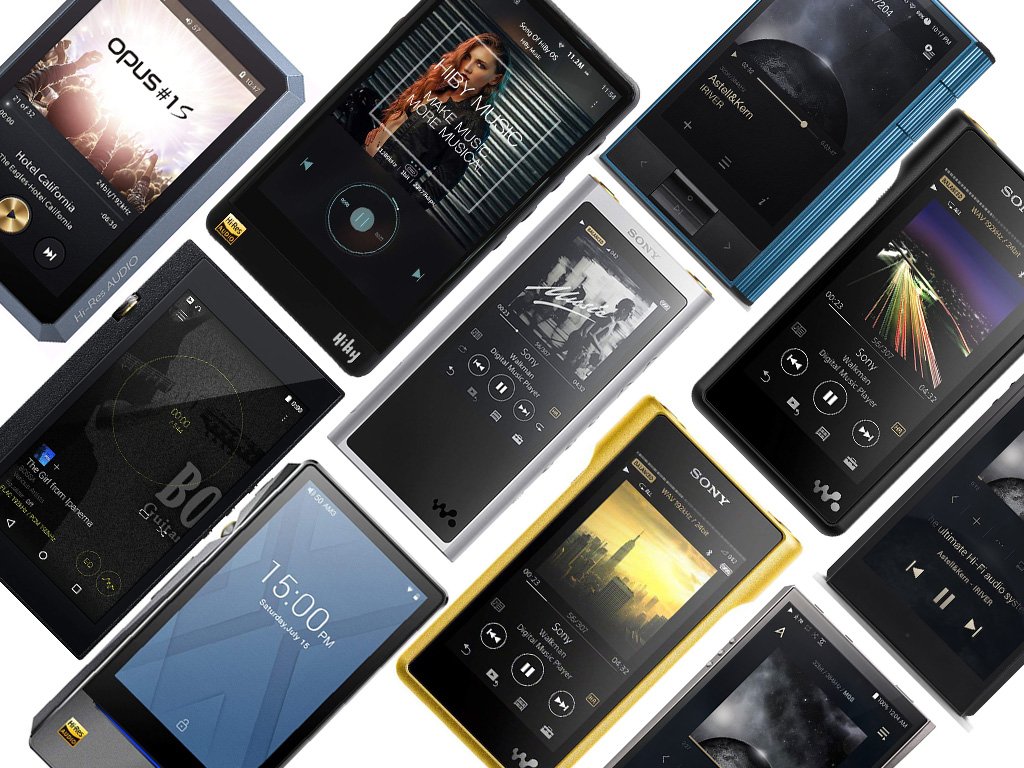 Like I said earlier, there is no one DAP fits all, or one DAP to rule them all, yet. True that there are several high-end DAPs nowadays that can do a lot of things. However, these DAPs tend to be (very) expensive, and some may have a tuning that doesn’t fit your taste or “not your cup of tea”.

It doesn’t mean that if a DAP is the most expensive in the market, then it is the best. Usually it is, but nowadays, there are a lot of DAPs that are affordable or mid-range-priced and are really good sounding. Some DAPs are expensive due to brand name, while other are expensive due to the set of features they offer.

In this article, I highlighted several DAPs that are best in their own category and price range. There are other DAPs that are good as well, but I didn’t include them to avoid the list from being too long. Instead, I’ll create a table later and include them there. Without further delay, let’s check out the best portable audio players now. 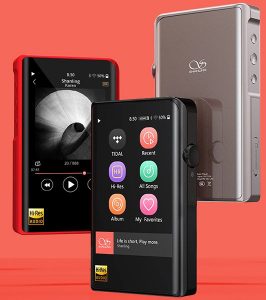 (MSRP $219 USD) First in the list is the Shanling M2X. This small and compact portable music player features a 3.2” touch screen display and is powered by Shanling’s MTouch 2.0 system. It features a single AKM AK4490EN DAC chip, with single TI OPA1612 chip as the low-pass filter and a dual AD8397 amplifier chip. It supports 32bit/384kHz PCM format up to DSD256. It has a 2.5mm balanced and 3.5mm single-ended output as well as Bluetooth 4.2 wireless connection. Its main storage is via a single microSD card slot. It’s a simple and straightforward music player for people who are in a budget.

For latest pricing and availability: the Shanling M2X is available on Amazon.com here. 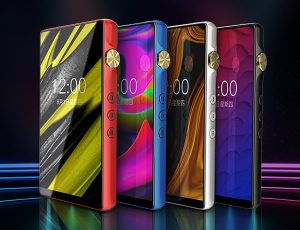 (MSRP $399 USD) Up next is the iBasso DX160, which is one of the company’s newer semi mid-level DAP. It features a nice 5-inch 1080p touchscreen display and runs on a modified Android 8.1 with MQA decoding. It features two Cirrus CS43198 DAC chips with support for PCM 32bit/384kHz and native DSD256. The unit itself is powered by an octa-core CPU with 2GB DDR3 RAM and 32GB internal storage. Its main storage is via a microSD card slot as well. For connectivity, it has a 3.5mm single-ended / lineout and 4.4mm balanced output; as well as Bluetooth 5.0 and WiFi 802.11 ac. Consider this if you want a much better user experience. 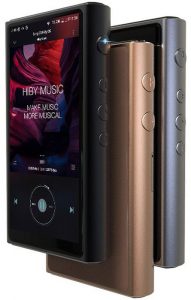 (MSRP $369) The HiBy R5 is the company’s answer to the iBasso DX160; or was it the other way around. Anyway, this was originally priced at $399 as well, but HiBy decided to lower the price to $369. It features a dual CS43198 with Dual Crystal Oscillators and Ultra Audio Transmission feature; and runs on Android 8.1 OS as well. It is powered by a Qualcomm Snapdragon 425 with QC3.0 support, and features Bluetooth 4.2 and WiFi 802.11 a/b/g. It also has a 3.5mm headphone out as well as 4.4mm balanced output. Its specs and set of features are quite similar with the iBasso DX160 but there are some areas where the DX160 excels. Perhaps that’s one reason why HiBy lowered the price to better compete with the DX160.

The HiBy R5 is available in three colors, you can check their latest pricing and availability on Amazon.com here.

We are now moving to the mid-range to higher-end level of DAPs. These are more feature rich, overall better sounding than the budget options and are more versatile without breaking the bank. 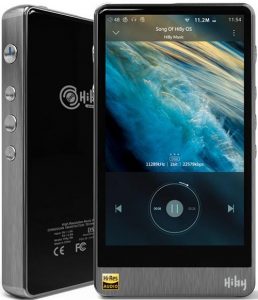 (MSRP $599) First in this category is the HiBy R6 Pro, the successor and an upgraded / refined version of the older R6. It features a dual ES9028Q2M DAC chip configuration with four MUSES8920 as I/V, two SSM6322 for low pass filter and Amp; and a Direct Transport Architecture bypassing Android. It runs on Android 8.1 and is powered by a Snapdragon 425 SoC, with 32GB of internal storage and a microSD card slot that can support up to 512GB microSDXC. It has a 3.5mm headphone out, a 4.4mm balanced out and WiFi 208.11 a/b/g/n with Bluetooth 4.2 for wireless connection.

The R6 Pro’s pricing seem to change from time to time. For latest pricing and availability of the R6 Pro check it here. 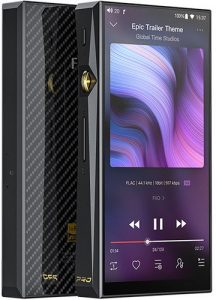 (MSRP $649.99) The Fiio M11 Pro is the company’s answer to the R6 Pro. The M11 Pro is also an upgraded and refined version of its predecessor, the FiiO M11. The Pro features two AK4497EQ DAC chips, a Samsung Exynos 7872 SoC, 64GB of internal storage with one microSD card slot can that “support up to 2TB” of microSDXC. The M11 Pro has three outputs, a 2.5mm balanced, a 3.5mm single-ended and a 4.4mm balanced output. It also has Bluetooth and dual-band WiFi wireless connection. This DAP has more features and capabilities, so if you are a FiiO fan, this is currently the best they have. 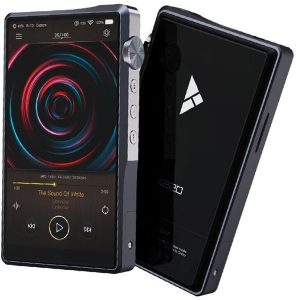 (MSRP $899) Now for my personal choice, the iBasso DX220 Reference DAP. Unlike the other DAPs I mentioned so far, this one features a removable AMP section. Meaning you can change the output type and the amplifier of your unit; resulting also in a change of sound signature. It features a Dual ES9028PRO DAC chips with support for PCM 32bit/384kHz up to native DSD512. It also has a huge 4400mAh battery, a really nice and detailed professional equalizer software and runs on Android 8.1 + Mango OS (dual system). It also features a nice 5-inch Sharp 1080p display, with 95% sRGB, 445ppi and 2.5D Corning glass panel. Among the DAPs mentioned in this list, for me the iBasso DX220 is the best, especially when paired with the iBasso AMP9 Nutube Vacuum tube amplifier module. You simply can’t go wrong with this DAP. 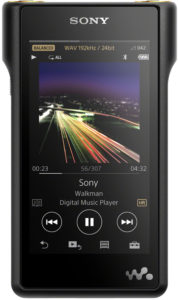 (MSRP $1,199) For the Sony fans and mainstream lovers out there, the Sony NW-WM1A is currently one of the best. It’s not the best since Sony has still one DAP above the NW-WM1A, which I will talk about shortly. The NW-WM1A runs on Sony’s proprietary software, so unlike most DAPs in this list, this one is a pure music player. It supports PCM 32bit/384kHz up to Native DSD 11.2MHz. It has a 3.5mm single-ended output and a 4.4mm balanced output. There’s also a 128GB built-in storage with one microSD card slot for storage expansion. The Sony NW-WM1A features DSEE HX and S-Master HX digital amp technology. In fact, most of the features in this player are Sony’s proprietary technology.

The Sony NW-WM1A Premium Walkman is getting older, so there may be changes to its price by now. Check its latest pricing and availability here.

(MSRP $1,199.00) The Cayin N6ii is the company’s semi-flagship or the little brother of Cayin’s flagship N8 DAP. Like the iBasso DX220, this one features a removable / interchangeable component. But unlike the DX220 where you can only replace the AMP section, with the N6ii you can replace the entire motherboard of the unit. Currently, there are two motherboard modules available; the A01 (which is the stock) and the T01 with better DAC and AMP components. The Cayin N6ii with stock A01 features AK4497EQ DAC chip and supports DSD256. It also has a 4.4mm balance output and 3.5mm headphone out. Meanwhile, the Cayin N6ii T01 features PCM1792A dual DAC chip and a much better AMP section. Aside from that, the N6ii runs on a modified Android 8.1; comes with WiFi dual band and Bluetooth 4.2; a huge 5900mAh battery with Quick Charge 3.0 support; and many more.

Best DAP for Full-Size Headphones on the Go 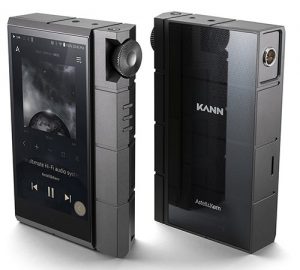 (MSRP $1,499.00) For those who wants a portable DAP, but needs a DAP with a powerful amplifier that can drive full-sized headphones properly, the AK Kann Cube is perhaps your best option; offering up to 12V of power. This thing is larger compared to the other DAPs listed here. It features a dual ESS ES9038PRO DAC design for Pro audio equipment and supports 32bit/384kHz up to native DSD256. Aside from the usual, 2.5mm balanced and 3.5mm headphone out, the KANN Cube even has a 5-pin mini XLR output, with 4Vrms, for even less noise. It also has a 128GB built-in memory, a nice 5-inch HD touch display, USB Type-C connector with fast charging support, WiFi and Bluetooth aptX HD for wireless streaming, and many more. If not for the software and versatility of the iBasso DX220, this is going to be my next best DAP.

For those who have the money to burn on a DAP and money is no object in the pursuit of ultimate audio bliss, then these last two DAPs may be what you are looking for. 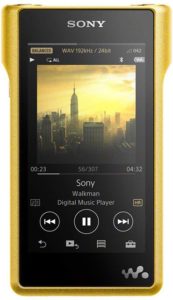 (MSRP $3,199.99) The Sony NW-WM1Z is part of Sony’s Signature series lineup. It’s Sony’s current flagship digital audio player, despite being available in the market for quite some time now. Compared to the NW-WM1A, the NW-WM1Z features better components; uses high quality Kimber Kable inside; double the storage capacity (256GB) and a much better sound quality than the WM1A. Of course, at this point, it is going to be subjective already. It doesn’t mean that since it’s doubled in almost all aspects, sound quality is also “doubled”. But it does offer a much better sound quality than the WM1A.

The Sony NW-WM1Z has been in the market for quite some time now, so check the latest pricing and availability here. 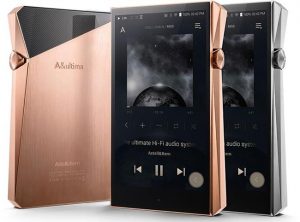 (MSRP $3,499.00) Astell&Kern’s latest flagship portable hi-resolution music player is the A&Ultima SP2000. It is said to be “a true high-resolution music player, with bit-to-bit playback up to 32bit/768kHz and native DSD512 support”. It features two AKM AK4499EQ DAC chips, octa-core CPU, Parametric EQ, Femto Clock, a 6Vrms balanced output and a 3Vrms unbalanced output. It also has 512GB of internal memory, 5” HD touch screen display, open App support for music streaming, dual band WiFi and Bluetooth with aptX HD support, and many more. The SP2000 is definitely not a value-oriented product; it is more of a luxury DAP, just like its predecessors.

Okay, for those who wants something more than just a music player; like a “smartphone DAP”, currently the best I could think of are the LG V40 or the LG G8 series. LG’s latest smartphones are built with a 32-bit Hi-Fi Quad DAC made by ESS Technology. I think the specific chip is called ES9218P. In the previous LG V20 and V30 series, it was Bang&Olufsen who tuned LG’s smartphones. They have a warmer and “consumer-friendly” tuning. Meanwhile, the newer LG V40 and G8 series are tuned by Meridian, and has a more linear and detailed tuning with better clarity.

This is currently my list of the best portable music players available in the market that are geared towards the hobbyist, enthusiasts and audiophiles alike. All of these portable music players have great to fantastic sound quality; and it comes down to personal preference. Audio is a subjective topic, and what’s good for you may not be good for me. Just one thing, do yourself a favor, if ever you are going to buy one of these DAPs, be sure to load them with high resolution lossless audio files, at least. Please don’t load them with a lossy and sometimes poorly encoded MP3 files. Otherwise it would defeat the purpose of getting one and you’re better off using your smartphone instead. Good luck!