Creative Sound Blaster E5 Review – Is It Worth Your Money?

Creative Labs recently sent us their latest portable DAC with Headphone Amplifier for the purpose of this review. The Sound Blaster E5 is a 24-bit/192kHz high resolution DAC/Amp built with audiophile grade components that is basically geared towards gamers, enthusiasts and music lovers who wants to bring the audio quality of their device or PC to the next level. I was able to spend a good amount of time with the Sound Blaster E5 and I would categorize the E5 as definitely the next step forward when it comes to entertainment like gaming, watching movies and the likes. I would also consider this as somewhere in the starting point for people who are just beginning (or has recently begun) their journey to the world of audiophiles. There are definitely much better sounding DAC and headphone amplifiers out there, but those are for the serious and passionate audiophiles already. Find out if this DAC with Amp is worth your money in my Sound Blaster E5 review below. 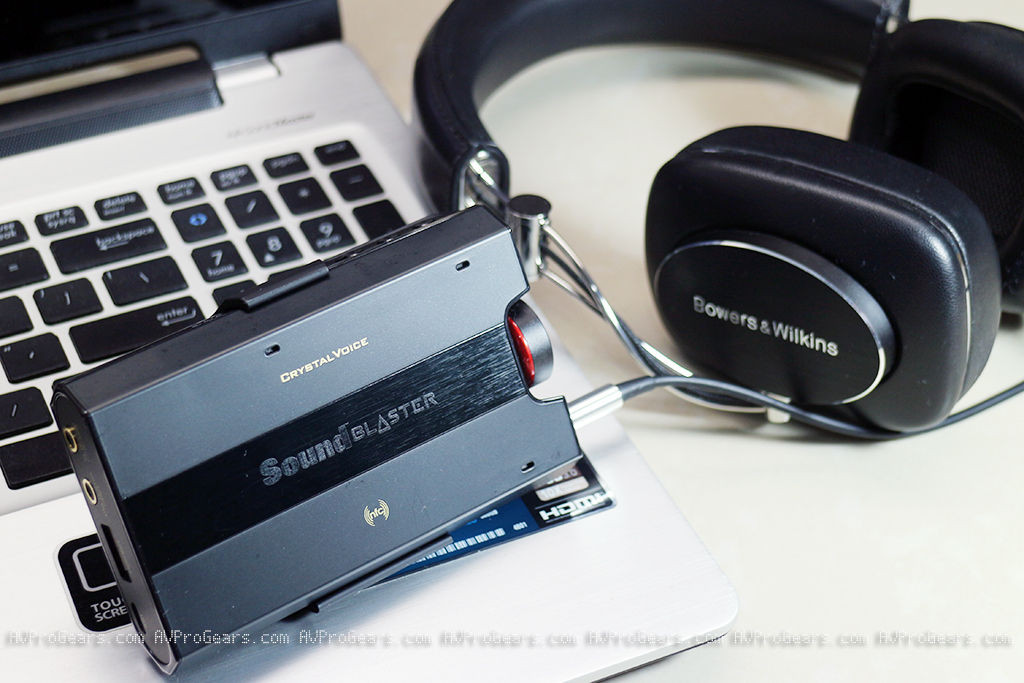 First in my Sound Blaster E5 DAC with AMP review, let’s take a closer look on the whole package and the product itself so that you’ll have an idea of what exactly you will be getting if ever you decide to grab an E5 for yourself. 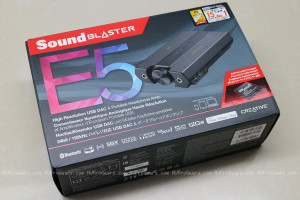 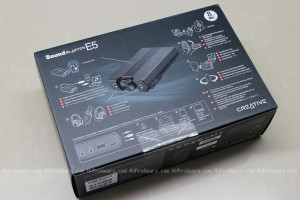 Starting with its box, the Sound Blaster E5 comes in this nice packaging with some of the features listed on both sides. The package includes the E5 itself, which you will find sitting on a velvet-surfaced padding; you also get a quick start guide, a warranty leaflet, a USB to microUSB cable, a mini TOSLINK cable for optical connection, a desk stand and two elastic bands for holding the E5 together with another mobile device. 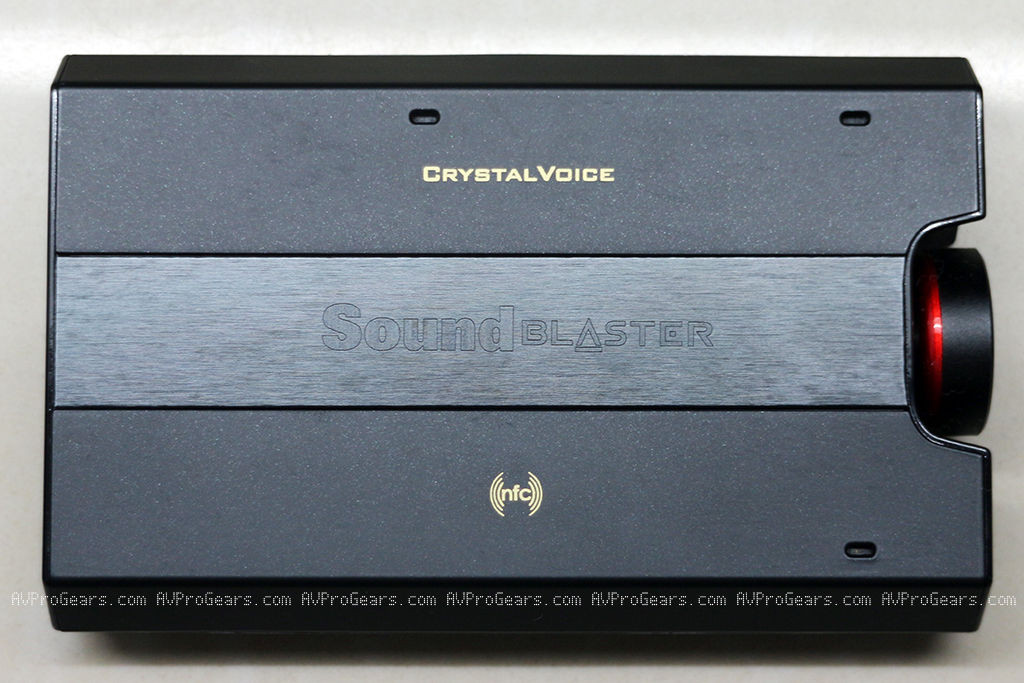 The Sound Blaster E5 doesn’t have an aluminum or metal body. I think the body is made out of hard plastic. As you can see from the photo above, the middle portion has this aluminum brushed surface with the Sound Blaster logo on it. Meanwhile the rest of the top portion, including its sides has a black matte finish. There is a large rubberized padding underneath the E5. It’s actually permanent and will serve as the E5’s base so that it won’t slip easily. 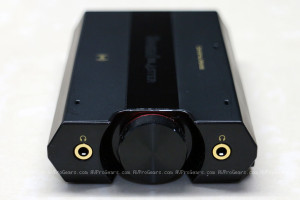 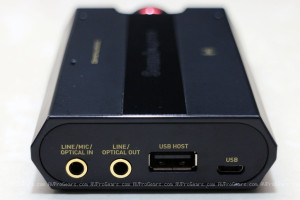 There are two 3.5mm output connectors on the front portion of the E5. Both 3.5mm plug can be used at the same time, so that two people (with his/her own headphone) can separately listen to the same music at the same time. That’s actually somewhat unique in a sense that most DAC/AMPs in the market have only one 3.5mm output. The volume knob rests on the middle and is somehow protected by the left and right 3.5mm ports. The knob can be continuously rotated towards the left or right, making it difficult to tell the current volume position. You will have to rely on the volume indicator on the device to which the E5 is connected. If the E5 is connected to a Windows PC, a small volume indicator will appear on the upper left portion of the screen as you turn the volume knob on the E5. Pressing the volume knob will instantly mute the device.

On the rear portion of the Sound Blaster E5, you get a line/mic/optical in, a line/optical out, USB host, and micro USB host (which also serves as the charging port). Now aside from the line in ports on the back, the E5 has a built in Bluetooth (low energy) for a wireless connectivity. It has up to 10m or 33 feet range and features Audio Codecs such as AAC, SBC, and aptX (low latency). It also has A2DP (Wireless stereo Bluetooth), AVRCP (Bluetooth remote control) and HFP (Handsfree Profile) Bluetooth profiles. 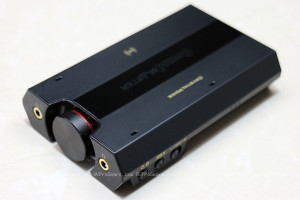 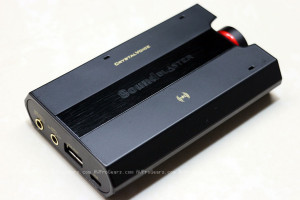 Under the hood, the Sound Blaster E5 features Creative’s SB-Axx1™ Audio Processor with SBX Pro Studio sound effects. Inside you should also be able to see a Cirrus Logic (CS4398) DAC chip, a Cirrus Logic (CS5361) ADC chip and a Texas Instruments (TPA6120A2) chip. All of these are audiophile-grade components which are also used by other companies in the audio industry. The Cirrus Logic (CS4398) 120dB supports high resolution audio playback of up to 24-bit/192kHz when connected to PC/Mac, including 24-bit/88.2kHz and 24-bit/176.4kHz. Meanwhile the Cirrus Logic (CS5361) 114dB ADC that delivers high quality, low noise analog line-in audio playback and audio recording of up to 24-bit/192kHz. The amplifier of the E5 may not be the best in the market when compared to high end amplifiers used by audiophiles. But it’s powerful enough to drive headphones with up to 600 ohms. Unfortunately I don’t have a headphone with this kind of ohms to test the amplifier’s performance.

Using the Sound Blaster E5 and its Software 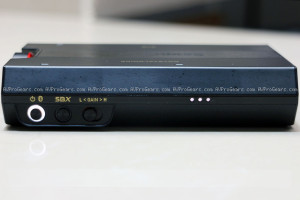 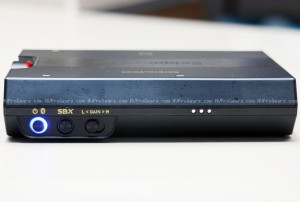 I find it very easy to use the Sound Blaster E5, and if you are familiar with similar devices, I doubt that you will have to read the manual. To turn on the E5, simply press the power button and hold it for a few seconds. Once the E5 is turned on, a circle white LED will light to indicate that the device is active. Holding the power button for a few more seconds will activate its Bluetooth. The white light will turn to a blinking Blue light. This indicates that the E5 is ready to pair with another Bluetooth device. Once paired, the Blue light will stop blinking. To turn off the E5, simply hold the power button longer until it turns off.

You will also see the SBX button and the gain switch side near the power button. Press the SBX button if you want to activate the SBX effects giving you that virtual surround effect. It can also be configured manually via its software. Set the gain switch to L or Low if you are using easy to drive headphones, usually around 32 ohm. Meanwhile set the E5’s gain switch to H or High if you are using a headphone with a bigger ohm.

You should see three tiny white dots in line with the switches’ symbol. Those are battery life indicator. Three white dots means that its fully charged or somewhere near it, two white dots means it’s around half, and 1 dot means battery life is nearly depleted. The Sound Blaster E5 has a built-in rechargeable lithium polymer 32000mAh battery which is rated to last up to 8 hours depending of your usage.  Battery life is not stellar, but it’s not bad either. During my test, the battery lasted for around 5 hours while using two headphones at the same time while streaming audio via Bluetooth. 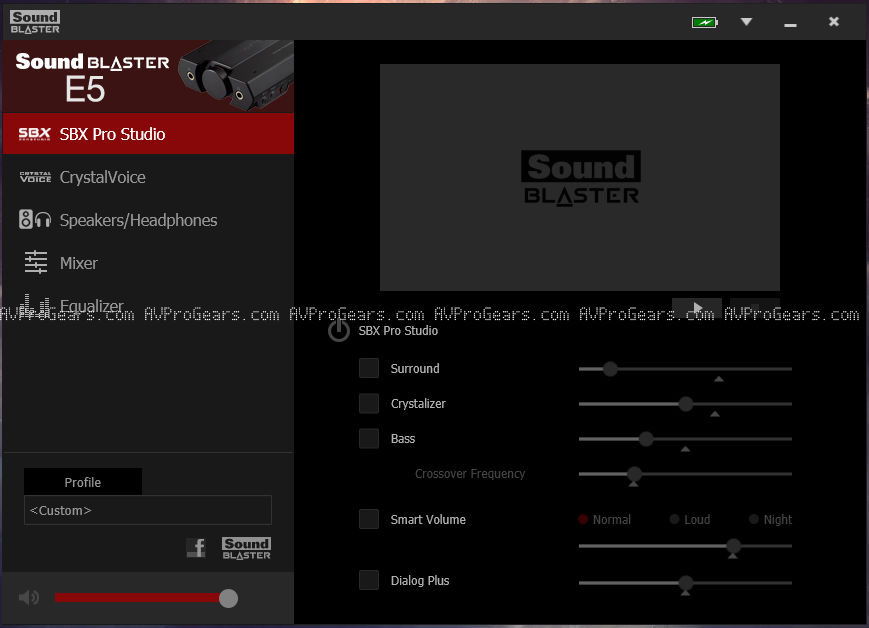 The Sound Blaster E5 software offers a number of customization. You can adjust its surround effect, the audio Crystalizer or add more bass for the bassheads. Another cool thing you can do with the E5 is too use a voice effect where it can alter the sound of your voice. You can make your voice sound like an elderly, a dwarf, male to female, female to male and etc. If you want to fine tune the audio you are listening with, you can also tweak its equalizer settings. 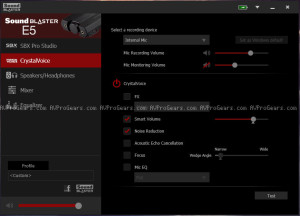 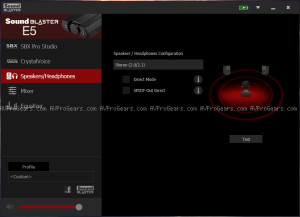 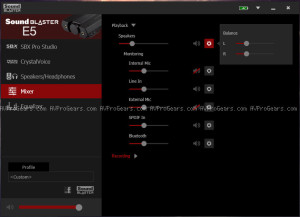 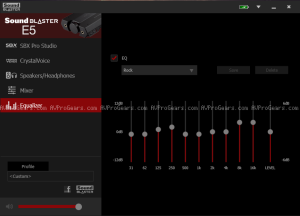 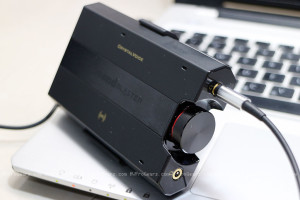 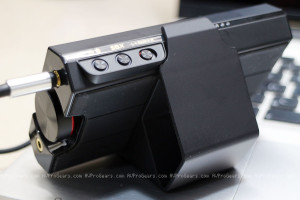 First, I’ll put myself in the shoes of a gamer and movie watcher. The Sound Blaster E5 produced a well-balanced and detailed audio quality without changing anything from the software. I tried playing several games, like CoD: Advanced Warfare and Shadow of Mordor using my B&W P7. The experience was great and very immersive. Every detail or elements of the sound effect is present. The gun shots and explosions sound full and round, with a good amount of impact. If you try to tweak the bass via the software, you can achieve more impact and “boom”. Does your headphone or headset doesn’t have any 7.1 surround effect? The E5 got you covered, simply fire up that SBX and you instantly get a surround sound effect. You can also tweak how wide or narrow the audio will sound via the software as well. By the way, there is no scout mode in the E5, unlike with the previous models. When it comes to watching movies, the E5 won’t disappoint you as well. Pair the E5 with a good speaker or headphone and it can make your movie watching experience more engaging and fun.

How about when it comes to listening music? For a typical music listener or for somehow who is just starting his/her journey in the world of audiophiles, the Sound Blaster E5 would be a good place to start. The sound quality is great, detailed, well-balanced and does support high resolution music playback. The sound signature is a bit warm, since it’s not entirely intended for the purists, but rather for those who are looking for a fun sound signature. However, I don’t think that serious audiophiles or music lovers who have already tried high end DAC/AMPs will appreciate the E5. There are definitely much better sounding DACs out there but those already have a really high price tag attached to it. 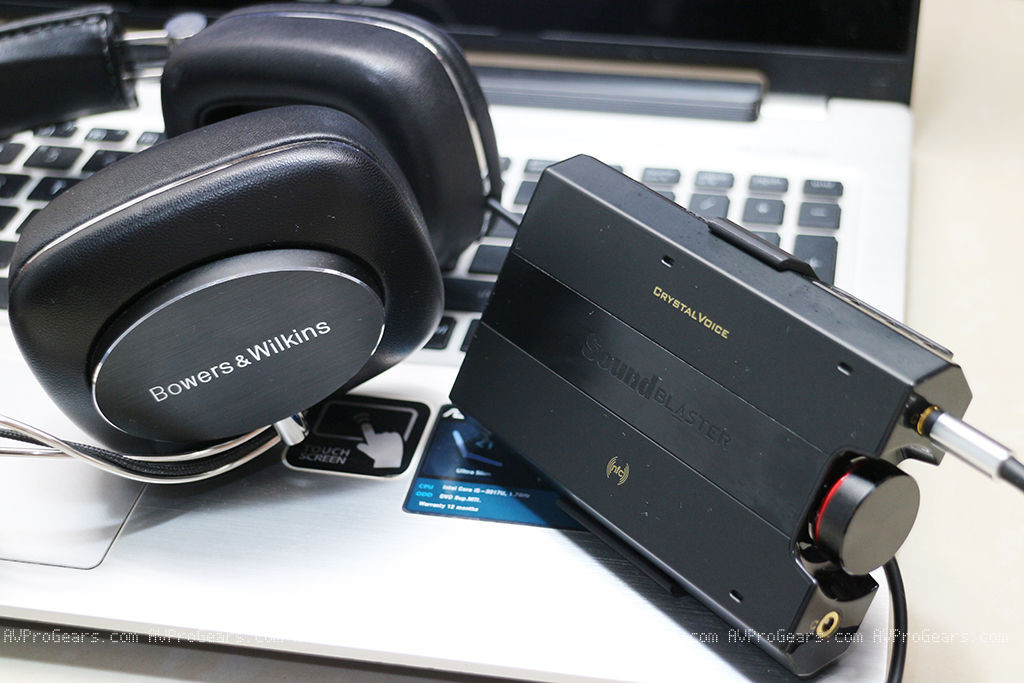 During my time with the Sound Blaster E5 it didn’t disappoint me. It was fun to play with, specially with the voice effects. I tried calling people and used the voice effects. They couldn’t recognize my voice. But it still needs fine tuning because there were times when it was not able to fully alter my voice specially when connecting via Bluetooth. When it comes to gaming, watching movies or just listening to your favorite music, the Sound Blaster E5 can very much handle those tasks without any problem.

The Sound Blaster E5 is a great DAC with headphone Amp that will surely serve gamers, enthusiasts and music lovers alike. However, I may not recommend this to audiophiles whose main purpose is to enjoy their music only. There are better DAC/AMPs out there but those are intended for the audiophiles already. So if you are looking for a good sounding and versatile DAC with headphone amplifier, consider the E5 in your list.

Check the latest pricing and availability of the Creative Sound Blaster E5 at Amazon here.