Shanling recently introduced their latest flagship portable Hi-Res digital audio player (DAP) – the Shanling M5s. It’s basically the successor to the dated M5 released around a couple of years ago. Aesthetically speaking, the M5s looks similar with the company’s M3s or a longer version of the M2s; but with refinements or improvements to the design. I like the M3s, it’s a good and reasonable mid-range DAP with good sound quality. A few hours ago, or yesterday, Shanling officially revealed the full specifications of the M5s. It features a fully balanced audio circuit and it’s powered by two new AKM AK4493EQ DAC chips combined with two OPA1612 and two AD8397. At this point, I can’t say how good the sound quality is since I haven’t auditioned it yet. But judging by the sound quality of the M3s, I bet the sound quality of the M5s will be stellar. Continue reading below for the full specifications of the Shanling M5s. 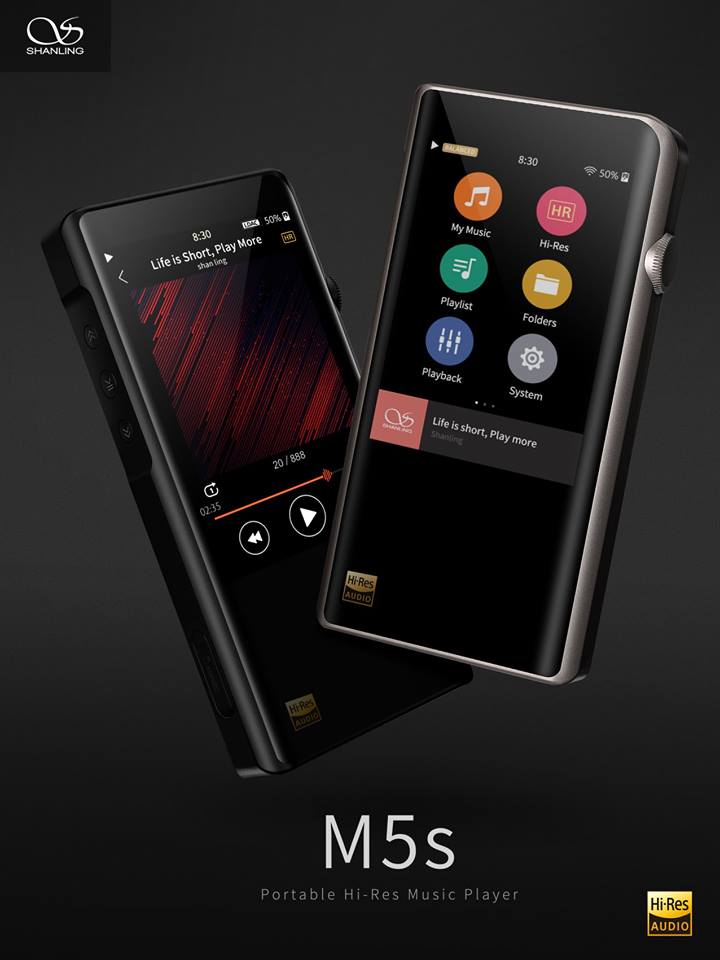 The AK4493EQ adopts an improved VELVET SOUND architecture, achieving high performances that is even greater than the AK4490EQ, by optimizing the circuit design. The AK4493EQ also adopts AKM’s same original dedicated audio process as the flagship DAC, the VERITA AK4497EQ. This process has improved the original acoustic sound expression that can be found in the sound strength and the data amount. In addition, the AK4493EQ corresponds to high-resolution sound sources, accepting a 22.4MHz DSD maximum input.

AKM AK4493EQ Features
● Not only the circuit design, but also the LSI manufacturing process was developed at AKM exclusively for AKM’s audio devices. The AK4493EQ adopts this process, improving low frequency noise performance and electric margin. 32-bit processing is integrated for the IRD, (Impulse Response Designed), filter, reproducing a detailed and natural signal wave. A harmonic sound filter was newly added to the existing five filters found in our previous generation device. So, six different digital filter types are selectable according to the user’s audio and system preferences.

● Supporting High Resolution Data
An industry first, a 22.4MHz DSD input is now supported. The digital input supports up to 768 kHz PCM and 22.4 MHz DSD, (Direct Stream Digital), recreating high-resolution sound that is as close as possible to the original acoustic source.

Cayin’s N8 flagship DAP features two AK4497EQ DAC chips, which is higher than the AK4493EQ. The Astell&Kern’s A&ultima SP1000 DAP also uses two AK4497EQ DAC chips. But this doesn’t mean that these DAP will sound the same. They won’t, but it’s good to know that Shanling is using a very good DAC chip, just a step below from the higher end AK4497.

The Shanling M5s supports hi resolution audio format from lossy format to 32bit/768Khz files and up to DSD256. It will features an MTouch System 2.0, which is a different user interface from the M3s. It features a 3.2-inch display and (finally) it’s a touch display. Notice that the volume knob is slightly recessed and that’s definitely an improvement from the volume knob on the M3s. The M5s measures 117mm x 59mm x 16mm and weighs around 178g.

In terms of connectivity and output, the M5s has a 3.5mm singled ended and 2.5mm balanced output. The balanced output is 540 mW into 16 Ohm. Unfortunately, there’s no 4.4mm output. Shanling is using a USB Type-C port and it will also serve as a USB DAC and transport connection. However, I’m not sure if it’s a USB 2.0 or a USB 3.0 Type-C. Does it matter? Yes it does! USB 3.0 is much faster compared to USB 2.0. Either way, USB 2.0 Type-C would do as well.

Aside from wired connections, the Shanling M5s features a two-way Bluetooth connectivity with LDAC/AAC and aptX support. The aptX is for transmitter only. Then there’s also a WiFi connectivity that supports DLNA, Airplay and OTA update.

It’s powered by a 3400 mAh battery and will have a battery life of up to 16 hours of playback using the 3.5mm single ended output or up to 9 hours with the balanced output. There’s no built-in memory, but it can support microSD / microSDXC cards of up to 512GB capacity. Although, it’s just going to be a single SD card slot.

As of the moment, Shanling hasn’t disclosed the suggested retail price and they are still waiting for the supply of the new AKM DAC chips. The company is targeting an October 2018 release. So hopefully by next month or early October we will have an idea on its retail price.