The bit is a new player when it comes to the audio gear market, specifically DAPs and DAC/AMP. Last year, they released their first portable digital audio player (DAP) and DAC/AMP, the Opus#1 and Opus#11. Following the success of the Opus#1, they unleashed their flagship DAP, the Opus#2, that aims to compete with other high-end portable DAPs. Now they have a new gear, positioned between the Opus#1 and Opus#3, and can probably be considered as a high-end DAP as well – the new Opus#3 portable Mastering Quality Sound (MQS) audio player. Aesthetically speaking, I find the new Opus#3 better than the Opus#2 in terms of body design, and it’s definitely better compared to the Opus#1 in terms of design and what’s under the hood. More details below… 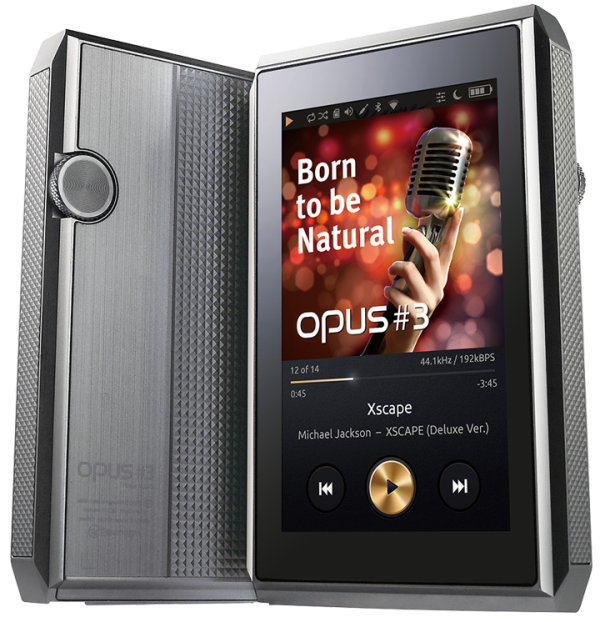 The Opus#3 DAP is powered by an ARM Cortex-A9 1.4GHz quad core SOC with a 1GB of DDR3 memory. At the heart of its audio section is a Burr-Brown PCM1792A 24bit DAC chip that supports native DSD playback up to DSD256. I was a bit surprised that this doesn’t feature a dual DAC, considering that the Opus#1 and Opus#2 features a dual DAC setup.

Another highlighted feature of the Opus#3 is the X-MOS audio processor, with full support for USB audio class 2.0 supporting both PCM and native DSD file formats. This basically means that you can connect the Opus#3 to your PC or smartphone. Speaking of connections, it also features DLNA and WiFi streaming; and yes it has Bluetooth v4.0 supporting A2DP and AVRCP but I don’t think it supports (or will support) aptX.

The Opus#3 sports a 4-inch IPS touch screen display with a resolution of 480×800 and features a nice tempered aluminum metal body. It has a 64GB of internal storage, there’s a 128GB optional, and it has a single microSD card slot that supports up to 256GB of microSD card for external storage expansion. It also features a small volume wheel with 150 steps, similar to what we see on AK Jr/300 series DAPs.

Aside from the dedicated volume wheel, the Opus#3 has physical control buttons (back, next, play/stop) on the other side. The power button is at the top, right next to the 3.5mm unbalanced plug (that also serves as an optical out) and 2.5mm balanced out supporting 4-pole plugs. At the bottom part is a micro USB port, right next to the micro SD card slot. Don’t you think it’s time to use (true) Type-C ports by this time?

Finally, the Opus#3 DAP is running on a (heavily) customized Android 5.1.1 and it features support for 3rd party streaming application like Spotify and etc. . The bit did warn though that depending on the application, some functions may be restricted. I just hope watching videos on YouTube (if it’s supported) won’t be out of sync.

Update: My guess was wrong! The Opus#3 supports third party, but no Google Play store. The Opus#3 came pre-installed with Spotify. Not sure yet how to install other 3rd party apps.

Check out the Opus#3 specifications table below for more information.

The bit didn’t mention when they will release it to the market. However, I am expecting that it is just around the corner since MusicTeck (a US distributor) has already listed it on their site and they’re accepting pre-order. The suggest retail price of the Opus#3 is $899 USD. It won’t be long until it gets listed on Amazon.com as well. Stay tuned!

UPDATE: The Bit Opus#3 is now available in the US. You can order one at Amazon.com here.